I own an Ultimaker 2 and upgraded it with the Olsson Block which is a custom heater block that allows for easy nozzle switching.
I used Cura as slicer in the past, but switched to Simplify3D. Simplify3D is faster than Cura (but speed with Cura isn't a problem either) and the slicing quality is better most of the time. Comparing overhangs with both slicers those from Simplify3D just turn out better and it has a great manual support feature. But the default settings seem to have some retraction issues with my printer and just changing the layer height can cause the parts to be extremely weak.
I also setup a Raspberry Pi with OctoPrint and connected a webcam to it. This allows me to monitor a print even if I am not around my printer, so if anything is wrong I can just cancel the print and don't waste a lot of filament. I also attached a servo to my printers on/off switch to remotely turn it on and off.

While PLA and ABS are the two most common materials in fused deposition modeling, there are a couple of different filament manufacturers with their own takes on materials with different properties.
So far I experimented with PLA, ABS, colorFabb XT and colorFabb CF20.

PLA has a low melting point (~160°C) and a low glass transition temperature (~60°C) which makes it very easy to print but not suitable for applications were it can get hot (>55°C). It also isn't very stiff and somewhat soft.
In my experience it is hard to do anything wrong with PLA, it just always turns out well and is what my current quadcopter prototype is made of.
I am printing this at 215°C and directly on my build plate at 60°C 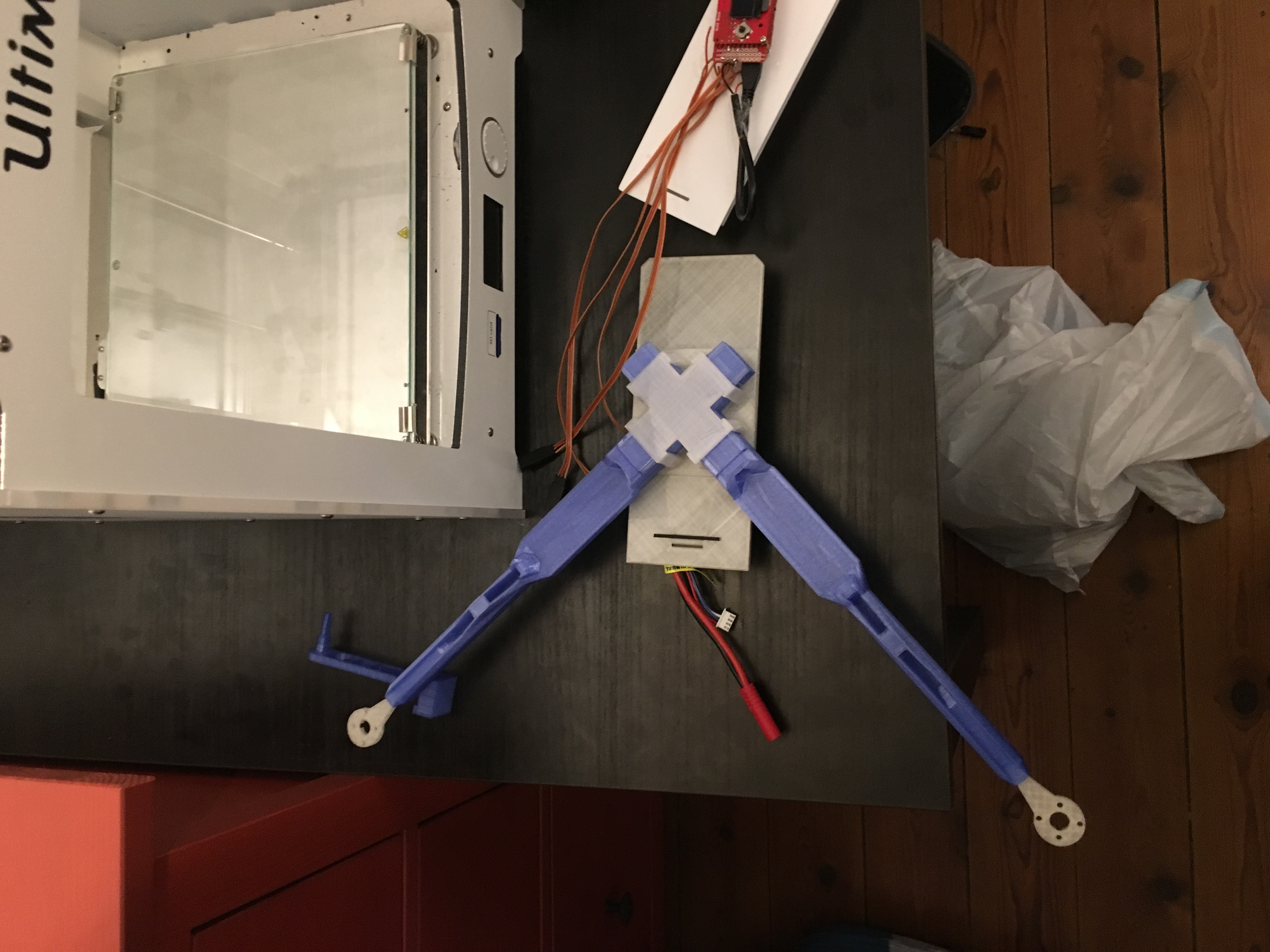 ABS has a much higher melting point (~230°C) and glass transition temperature (~100°C) than PLA.
While these are useful properties for some applications it also makes it harder to print. The main issue I have been having was keeping it fixed on the build plate. Just like everything else, it gets a bit smaller when cooling down, but with the higher temperatures it cools down a lot faster than PLA and pulls it off the build plate. What helps is a higher room temperature and a hotter build plate. A brim is also useful. Some people encase their printers to keep the heat in.
What works for me is turning the heaters on to the maximum, a print temperature of 260° and the build plate at 115°.
My prints didn't turn out perfect, but good enough to use. 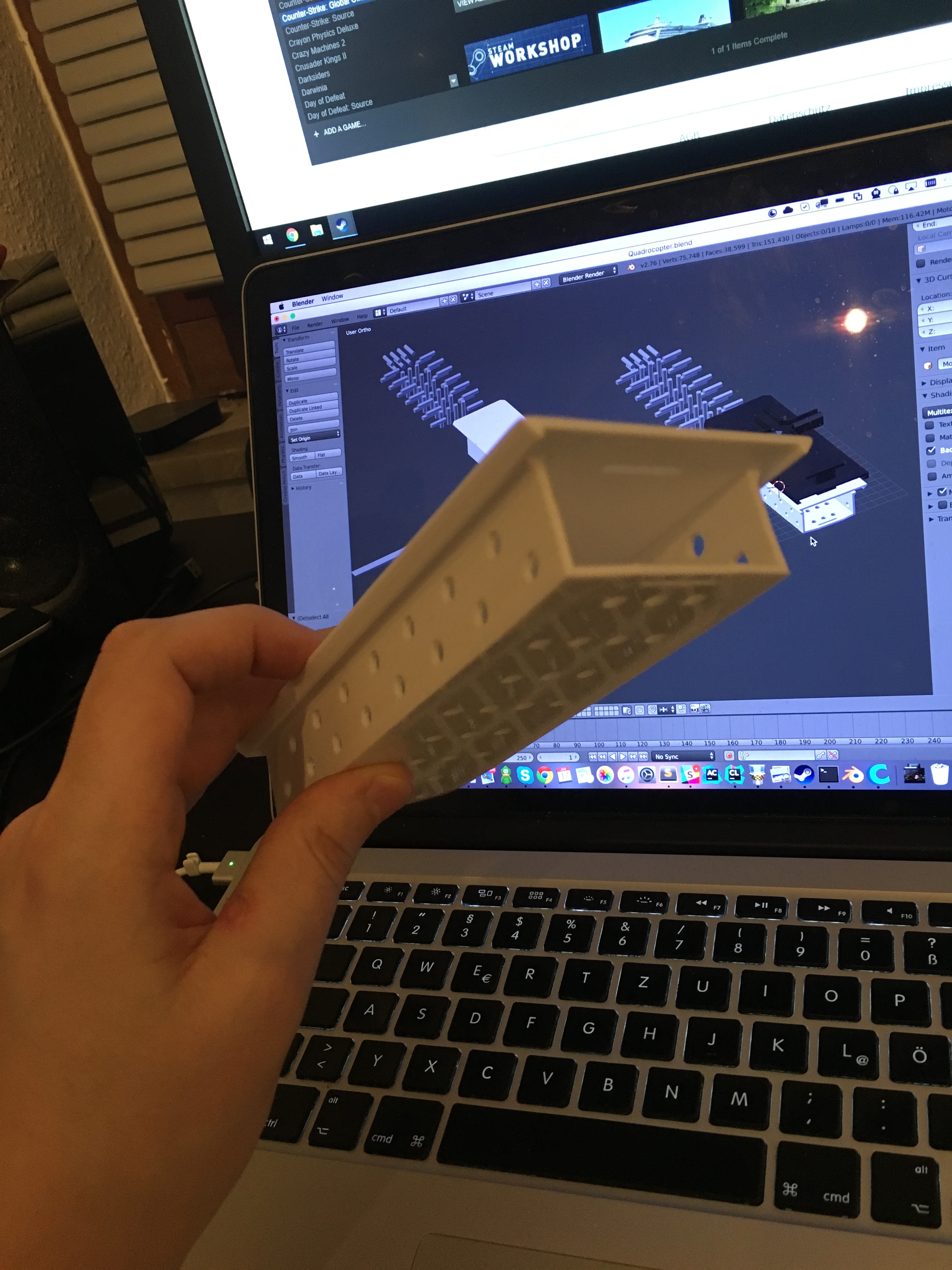 I think he idea of this is to find a middle way between the properties of ABS and the ease of use of PLA.
The problems are similar to those with ABS, but printing it at similar settings turns out much nicer. 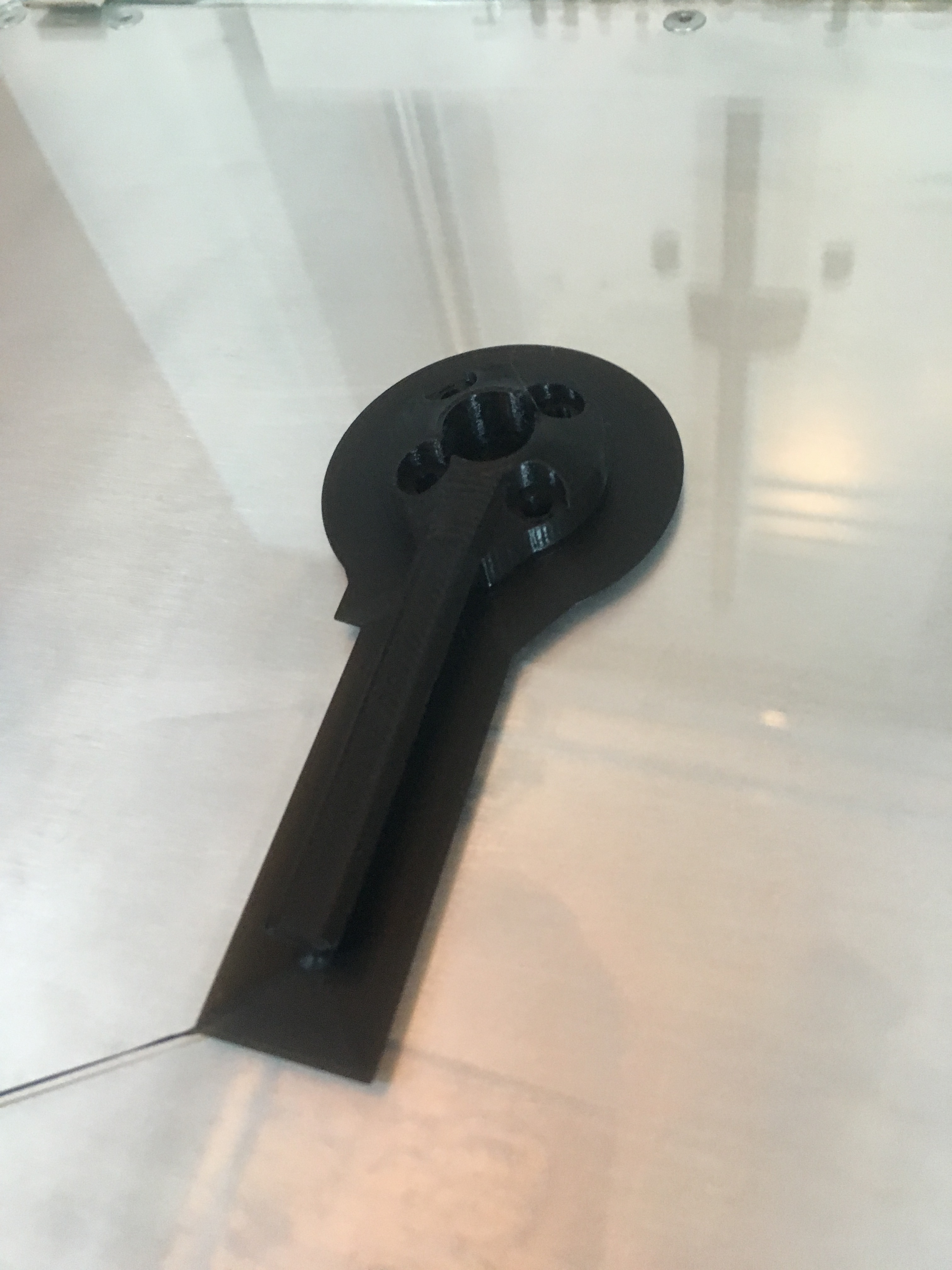 This is the material I would like to use for my quadcopter in the future. It contains 20% carbon fiber and is a lot stiffer than the other materials I tried.
Printing is again at similar settings to ABS. The main problem I have with it is that it likes to stick to the nozzle and build a blobb which then at some point ends up in the print somewhere. This can be acceptable, but sometimes happens to be in critical spots...
Also this one is known for destroying nozzles, so a hardened steel nozzle should be used. 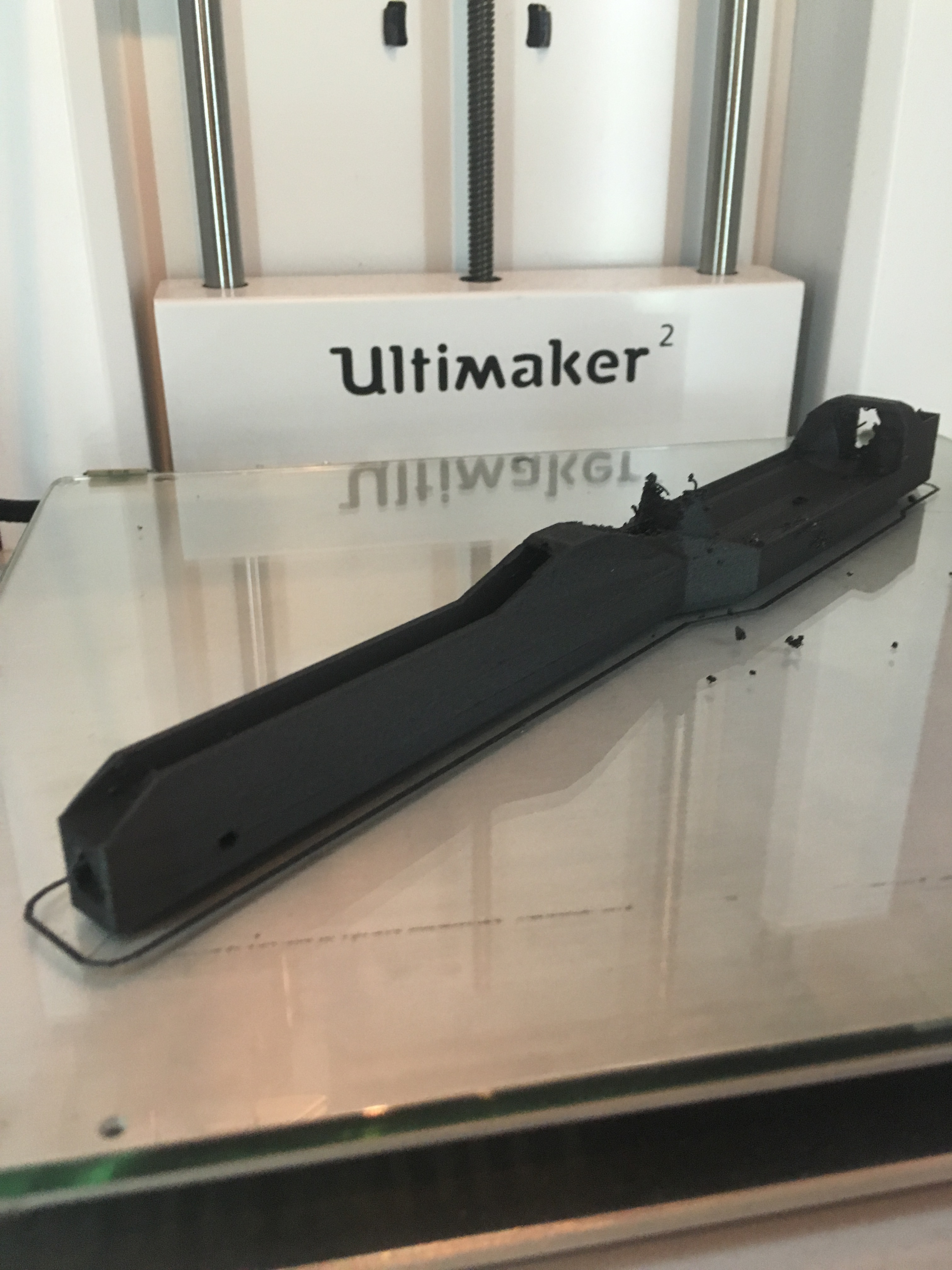 My current parts are all printed in PLA at a layer height of 0.15mm with Simpify3Ds default speed settings. Most of the frame is using 30% infill, except for the parts the motors are mounted on which use 100% infill. I found out that at 30% they start vibrating extremely, while at 100% there are only very little vibrations.
For this part and the arms I am using a brim because some areas of these don't stick to the build plate without.
Most important for parts sticking to the build plate is to keep the build plate clean. I am cleaning it with spiritus based glass cleaner before each print and it makes a big difference.

Inertial Measurement UnitI am using the Sparkfun 9DoF Block for Intel Edison which has an accelerometer, gyroscope and magnetometer. And while the accelerometer points down if it does not move it might also 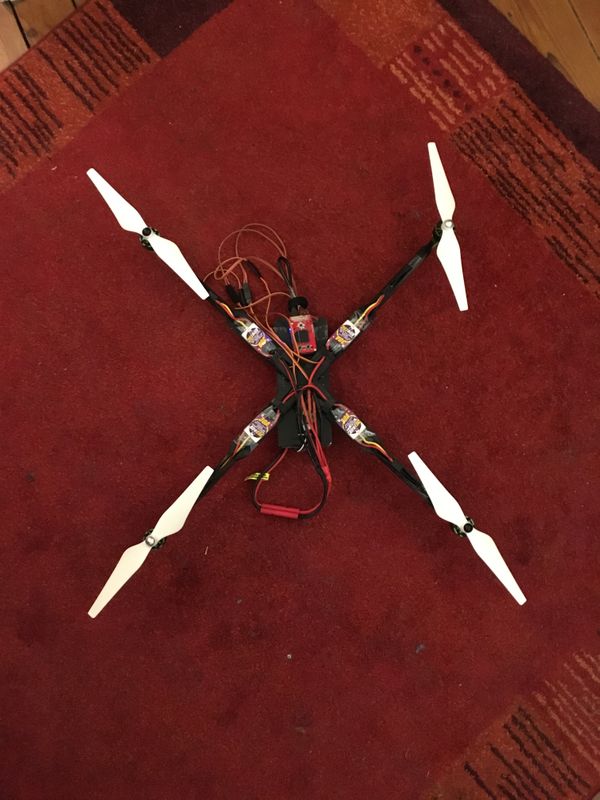 Introduction I am not exactly great at this whole thing and I am constantly trying to improve things, so this is based on my design at the time of writing which is the

SlinDev
—
Building a Quadcopter - Part 4: Printing the frame
Share this